Far from the ivory towers

I last saw Clare at university in Cambridge. She was in the year above me at Newnham and President of the debating Union, whereas I was President of a tiny group called Support for the Homeless. So, whilst she welcomed world famous celebrities and politicians, I worked in a night shelter and was sponsored by Clare and others to sleep in a bitterly cold graveyard under wintry stars.

Twenty years later it was a little surreal to give Clare a hug at 8:30 on a chilly Saturday morning and welcome her to HMP Styal. She knew what I was up to through Twitter (where we follow each other as @ClareBalding and @Clare_McGregor) and had approached me about giving a talk. Now, thanks to the permission of the Governor and the Ministry of Justice, here she was.

The prison couldn’t have looked better in the sharp autumn sunshine as a prison officer and two prisoners showed Clare round (with clanging gates ringing out clearly behind us). Here’s the bird’s eye view.

First up we heard how the charity running the Mother and Baby Unit ensures prisoners’ babies’ lives are as normal as possible. Clare even met the youngest person in Styal – the newborn daughter of my latest coaching client. In the house next door we walked in on women doing their Saturday morning aerobics in front of a television. All happily continued punching the air like Rocky and talking to Clare despite everyone’s laughter.

On reaching the wing a prisoner looked at me in amazement and mouthed: “It’s the horsey woman!” Another was intent on convincing Clare she’d met her in Styal the year before, until a member of staff quietly suggested she might know her “from the telly”. (An experience familiar to anyone whose instinct to say hello to a familiar face has been overridden just in time by remembering they don’t actually know you.)

Before a prisoner interviewed her for Styalistic Radio (the prison’s own station that broadcasts within the prison estate), Clare popped into the library to sign a copy of her book ‘My Animals and Other Family’ (available in all good bookshops or you can track it down through clarebalding.co.uk) and, with great amusement, signed airbrushed photos of herself in that month’s Diva magazine.

“Ludis pro omnes” – Sport for All?

Prisoners and visitors who’d come in to hear Clare speak were waiting in the gym indistinguishable from one another (literally so for at least one visitor who didn’t realise she was chatting to an inmate until she said goodbye to her near the gate). 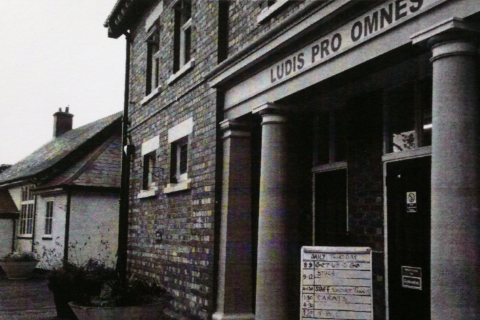 The Gym at Styal

The Latin words above the gym’s door are (at the risk of sounding like John Cleese’s Roman centurion in the Life of Brian) only loosely intelligible as Sport for All. However, the motto was apt as Clare spoke about her passion for women to be more involved and for women’s sport to have a higher profile. Clare’s reflections on presenting the Olympics and Paralympics stressed just how much more we are all capable of than we might think. How far are we really held back by what we think, rather than by what we can do?

Clare spoke of how she’d ended up where she is today, how ‘coming out’ should become a redundant phrase, and shared a few of her mistakes (which were often in a different league to most; few can lay claim to launching a sausage across a dining table towards the queen).

However, more people in the gym could relate to Clare being in a group who saw shoplifting as a sport at school. When sent home from school after being caught Clare made a decision that she didn’t want to be like the crowd. She wanted to be different. “Don’t be obsessed with what other people think: you don’t know what they think, so don’t care what they think, only care what you think.”

The talk backed up so much of what we do and say as coaches in the prison. How much we can change: “If you think every day: What can I do? What can I learn? What am I capable of?”

Listening coaches thought I’d set up the final question and primed Clare when she was asked how she coped when she wasn’t feeling totally confident about something and replied: “Have a clear vision of what you want to achieve…” Put yourself in any situation and, if you are focused enough on what it is you want to do, you can do it. She applied this approach to her life and it was what the Olympics were about.

This “anything is possible” message really made an impact. And not just on the inmates. As well as leaving her words behind, Clare took time to sign books and pieces of paper, chat and have her photo taken with people who’d make the visit happen. Someone kindly pointed out that this really should include me, so here we are.

On leaving Clare tweeted: “That was absolutely fascinating. So impressed with the attitude and atmosphere at Styal Prison. Giving women a chance to change.” She’d said in the gym that “This is a prison that respects you as individuals” and I felt (nonsensically) proud that she had such a strong sense of that from her brief and unchoreographed time inside.

What did someone visiting a prison ever do for us?

Showing a high profile and down to earth role model around the prison had a really positive impact and Clare talking about her own shoplifting helped break down the idea of offenders and prisoners as a species apart. A member of staff who Clare met said it: “makes the women feel like they matter”. Self-esteem is a huge issue within the prison and one we see all the time as coaches. A prisoner said: “She’s always been my hero. It’s amazing she gave up her time to speak to us” and “was normal and just chatted to me like I was a normal person not a prisoner.” A visitor said: “women, as they become institutionalised, lose their sense of autonomy and self determinism. I think Clare brought something very fresh that challenged that”.

We can’t break down the prison walls but we can increase understanding between those on the inside and those without. Although there is clearly some distance to go… We’re going to work on this. It’s just one of many ideas, plans and dreams prompted by the day Ms Balding came to Styal.

Thank you so much for taking the time to come in, Clare.  We’d never have guessed what would happen as a result.